5G: It’s not a pandemic but it is a game changer 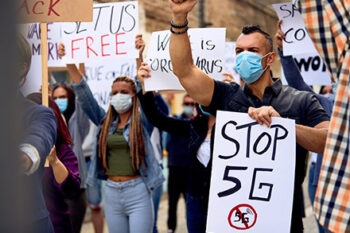 Sometimes in life you’ve just got to have a laugh. I felt like that recently when I saw the scenes played around Australia surrounding the impact of 5G.

While everyone has the right to protest, the protests railing against the introduction of 5G have pushed the realms of believability. Connecting it to everything from cancer to the recent COVID-19 pandemic, protestors sought to rally Australians and our various levels of government to roundly reject 5G. Some protestors even suggested there was a link between Bill Gates and some sort of ‘evil empire’ designed to control our minds…

Yes…I know it’s completely insane, and most reasonably-minded people ignore it. But it is funny to examine how people react to new technology.

From steam engines, PCs and on to 5G

5G is just another technology that has been demonised for little to no reason. While it may seem ridiculous, it’s clear that it’s not the only tech to suffer the issue of people fearing its introduction.

Over history, there have been numerous examples. Back in the 1800’s, people feared the introduction of the steam engine, with paranoia gripping many workers who thought that the all-powerful new invention would replace them and their jobs. Of course, while it revolutionised everything from transport to manufacturing, improving the way we lived and worked, we all adapted. Ditto for the PC, which in the 80’s, had people fearing they’d never work again. We’re seeing a similar, if somewhat muted reaction now, to artificial intelligence and robotics.

5G is slightly different in that it’s a fear that it impacts our health. Even though this has been repeatedly disproven (we had similar reactions to 4G too), for some people all you need is an ‘Instagram’ expert and panic ensues.

5G is a game changer

The reality of 5G is that it will make a massive difference. It’s a huge leap forward from 4G and will revolutionise the way we work and live our lives.

Speed is one of the main factors. We know how Australians often lament the perceived lack of Internet speed; 5G will dramatically improve this. There have even been some experts speculating that it could make the NBN somewhat redundant.

Could that happen? Certainly there’s a chance that wireless will replace fibre optic style comms networks in the future. We’re potentially at a tipping point with 5G, in that the speed increase and our ability to utilise it, particularly in business, are so great. Some providers are discussing 5G plans as an opportunity to go ‘5G only’. It will be interesting to watch this space develop over the next 12-18 months here in Australia.

Ultimately, it’s worth ignoring some of the more ‘out there’ ideas around 5G. I always like the analogy around the ‘Karens’ of the world: busybodies, male and female, who peddle out their theories with ‘facts’ that don’t quite stack up on closer inspection. When it comes to tech, it pays to focus on the experts and not the fringe dwellers.

What are your thoughts? Keen to here what you think, email me at steve@projectprofessionalservices.com.au